**WARNING, there are no crafts or baked goods in this post! SHOCKED? I did however, eat a piece of cherry pie while writing it. **

I tend not to get too attached to places and things. Diet Dr. Pepper? Yes. Bad TV shows? I’ll watch ’em for hours. I get obsessed but not attached. When I graduated from high school, and then college, leaving most of the friends I had made and places I had made a home, I shed a tear or two…maybe, and then became distracted with anticipation. My husband jokes there’s not a sentimental bone in my body.

So I was extremely surprised by how overcome with emotion I have been over the recent loss of a neighbor. No, they didn’t die, they didn’t even move out of the state. But they were, for two years, literally a stone’s throw in distance, and now they are gone.

You could always count on my neighbor, Megan, to be outside negotiating with her her two adorable but rambunctious boys, while holding her little girl who is just a few months older than Gigi. Megan was the tannest mom on the block for that reason, three kids and a total hot bod.

Megan figured out I was pregnant (before I was openly telling people) and brought me Caprisuns for my nausea. (Who knew? So GOOD!) And then when Ginger was born, and would cry and cry and cry, I could walk outside, and within a few minutes Megan would appear, either to hold Ginger, or make me feel better about still being in my pajamas at 3pm. And most days Megan made that fussy hour before Gigi’s bedtime fly, by taking time to chat with me, probably instead of doing a long list of things she needed to do.

Megan, was a phenomenal neighbor simply because she was a “neighbor.” And her absence, and the hole it has left in my day-to-day life, have made me wonder what kind of neighbor am I?

It’s very easy to go about our days, spending our limited free time with the people we are closest to, never thinking to reach out to the people who are GEOGRAPHICALLY closest to. Even if they are just superficial relationships at first. Because honestly, I think I spend more time making casual acquaintances ONLINE, than I do in real life. And if I’m not careful I might just become like that Sandra Bullock character in the movie The Net.

ANYWAY. Not to get all deep and heaven forbid didactic, but I’d thought I’d just throw it out there as sort of an “AH-HAH” that I’ve had lately. I’ve been having all sorts of Mr. Roger’s moments.

I think as I get older I’m becoming more sentimental because with age comes life experience. And with experience pain. And nothing makes your heart softer and more open than pain.

And so, on that note of blatant sentimentality, I will leave you with these pictures of some really amazing dads. I hope you have a Father in your life that was worth celebrating yesterday.

I’m very blessed to have quite a few. 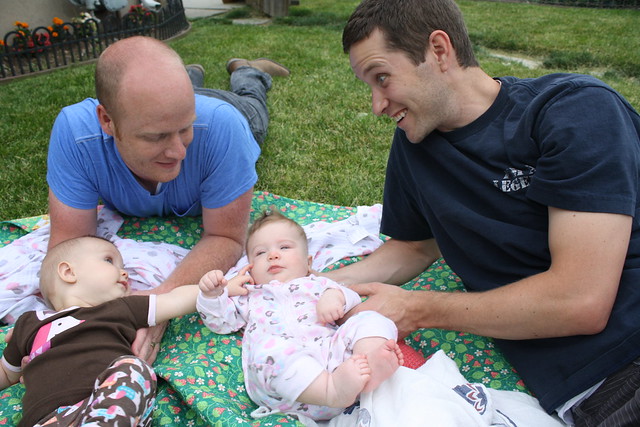 Have a fabulous Monday!

p.s. I made the steak again (for my Father-in-law) STILL SO AMAZING
p.p.s. I guilted my Mother-in-law to baking me a WHOLE cherry pie, now I have a whole pie to myself
p.p.p.s and now you’re thinking, “Why doesn’t she share that pie with her neighbors?”
p.p.p.p.s. but I ask you, “Is pie really made for sharing?”