So before I totally defect to the donut…which I have decided to refuse to spell as “doughnut” because it’s not as fun…I wanted to try making a cupcake with a filling. The people on Cupcake Wars (Melany wins for best comment, the host really does look like a Keebler Elf) are always filling their cupcakes with cool things.

I decided to make these Lemon Cupcakes with Lemon-Blueberry Buttercream filled with lemon curd. I made them for what I have deemed Fringe Fest 2011. I will share pictures of the necklaces soon, in the meantime check out Susan’s. But let’s get back to the sugar.

This was my first time trying a recipe from My Baking Addiction, and I will trust her with my baking life from here on out! THEY WERE SO GOOD. I know I say that about all the recipes I share, but it’s because I only share recipes that are freaking awesome.

Anyway. I followed the recipe exactly. I didn’t have an apple corer (suggested to hollow out the cupcakes) so I used a piping tip, and it worked really well! I even bought special “cake flour” and I really suggest doing so because it makes the crumb of the cake so light. The recipe was pitch perfect. My cupcakes aren’t nearly as beautiful as hers, and my frosting turned pinkish from the blueberries…but it didn’t matter, because they were heavenly. 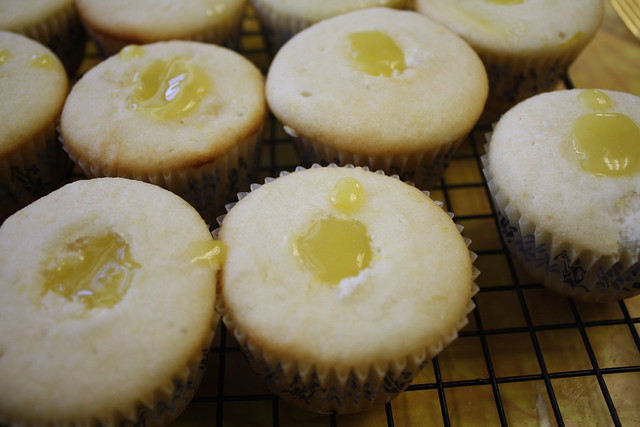 They really are the perfect summer treat, and awesome for a ladies night or a Fringe Fest.

p.s. On a completely UNRELATED note, if you want to see some of the most adorable pictures of my sister Andrea’s baby (and other beautiful pictures) GO HERE. Then come back and we can talk about how adorable my niece is. Andrea never blogs so I’ve resorted to outside sources.