Sometimes it’s hard having so many absurd opinions, and only one person to share them with. It’s most likely harder for Eric to listen to them over and over…but it’s his fault for marrying me.

Usually I try to refrain from posting opinions that could offend you, your mother, your eyebrow waxer, or your enemies (not that you have any). But for some reason, I’m feeling the need to share, and because I cannot sleep, I’ve decided to unload my brain chatter.

Plus, it’s been a while since I compiled a list.

1. Wearing flannel pajama pants in public is a sin.

I’ll say a it’s sin for women, and it’s an unpardonable sin for men.

Please note here that I have specified “flannel” pajama pants. I have nothing against track pants, sweat pants, a nice sturdy pair of thermals, spandex, workout wear, or even those velour rhinestone studded pants in public. But anyone over the age of 16 caught wearing flannel pajama pants out and about, better have a serious case of the stomach flu.

Flannel has a way of caressing the body, especially that cheap flimsy variety that tends to have Homer Simpson eating donuts on it, that no one should have to be exposed to while shopping for groceries.

It’s this particular genre of lounge wear (the licensed character variety) that I find particularly offensive. I have been known to shudder, gasp, and shake my head in disappointment when confronted with grown men wearing tweety bird pajama pants.

With sweat pants available for such great prices at your local Wal-mart, I just think there is no excuse for exposing me to flannel pajama pants that are clinging to a grown man’s butt. Especially because the men who tend to wear these pants probably aren’t gym-goers.

“Oh, Alison, that’s so harsh!” No it’s not, if they went to the gym they’d be wearing their gym pants.

2. Olive Garden’s shocking success reflects poorly on us as Americans.

I’m not Italian. I’m not a food critic. But I have been trained in marketing, worked in advertising, and I LOVE to analyze why certain businesses fail and others succeed.

I’m not a food snob, I have big mac attacks, eat at chain restaurants, and I put ketchup on almost all of my Mexican food. But I find Olive Garden overwhelmingly bland and mediocre. How it not only continues to stay in business but here, in its Provo location THRIVE, truly baffles my mind.

Many argue, “Oh! But I love the salad and bread sticks!” Which FURTHER baffles the mind. The bread sticks are hardly ever warm or soft, and the salad is the bagged iceberg variety. Which I could totally forgive if the dressing was original. But it’s not!

I will say that the service is always exceptional, and they do make me feel like family. So much so that when they ask how my meal is, I lie, so as to spare their feelings.

I think its success reflects poorly on us as a society because I think Olive Garden is safe. It’s Italian but it’s not TOO Italian. Their “Garlic Chicken” has garlic flavor, but will not cause you to ooze garlic from your pores. You in no way are asked to leave your comfort zone or expand your palette. Feel free to disagree, but I’m not budging on this one.

Besides, why anyone would choose to eat at an Olive Garden if there is a Carrabbas readily available, is beyond me. I love Carrabbas.

I think I’ve mentioned this one before. And it’s an opinion I fully realize is wrong (probably). But I can’t help it. I still see naps, and sleeping in general as a sign of weakness. And we all know Martha would agree. My husband, on the other hand, does not. He loves to nap, and I will continue to act out and bemoan feelings of abandonment each time he chooses to take one.

4. I have the cutest baby in the world.

As evidence for this opinion I submit the following: pictures of my baby wearing a hoodie I made her using this pattern. 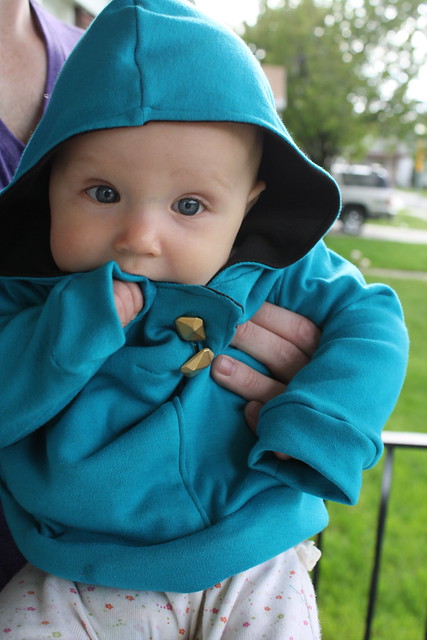 And there you have it. I will probably continue this list. Or, abruptly decide that I want to have nothing to do with it.

But I love you all! I hope you’re being crafty. I would also like to add that I am thrilled and flattered beyond belief that so many people “LIKE” me so far (see my post below, I’m not just sounding desperate for validation I swear). Thank you for your support! I like you too.